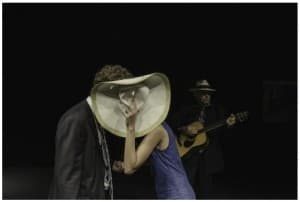 One of the challenges that I did not anticipate as author and producer of Our Man in Beijng, was one of the female actors refusing to kiss the male lead.  As the play swung into rehearsal, and at the last scene, the kissing scene, she displayed some discomfort about kissing Peter Muir, the male lead, an experienced professional actor in his thirties. So director Wolf Heidecker had to come up with an idea that the kiss should be done behind a hat. A pretend kiss hidden from the audience, in other words. I found her discomfort regarding the kissing bit really interesting. However, during the second season of Our Man in Beijing at La Mama, she could not play the female lead so we replaced her with another actress in her mid 20’s. Like her, she was also reluctant and sheepishly looked at the director when it came to that last scene. At this point, Peter Muir, probably the most experienced actor in the whole cast, said the kiss could be done without lips touching, and very cleverly, he taught her how to do this without the hat. When the season at La Mama was over, we went on tour to Sandy Point.  Peter could not come with us and both male lead and female lead had to be changed. Sharon Karina, a Chinese Indonesian woman in her mid thirties, who has lived in Australia many years, and married to an Australian, also found it uncomfortable doing the kissing scene, with the new male lead, Ashley Macklin, who replaced Peter Muir.

Then on tour in Malaysia, Siew Yong Koay, a local Malaysian Chinese woman in her mid-twenties played Mei Ling, and like the others before her, would not kiss. So with great vehemence, she said: “I am not going to kiss him.” Embarrassed, defensive, uncomfortable, reluctant, by whatever adjectives one would like to use to describe all four actresses’ attitude towards kissing on stage, it boils down to one thing: they would not do the stage kiss. These four women, and I am talking about four young Chinese women who are building their budding acting career, simply would not bring themselves to do the kissing scene, admittedly, they are not Michele Yeoh or your Hollywood movie stars. This was in spite of the fact that they were keen actresses, all ambitious to have an acting career. But they baulked at a simple kissing scene. The question is why.

Hmmm…Could it be because the male lead had bad breath or body odour? Or he had eaten too much garlic prior to rehearsal?  If only it was this simplistic…(sigh!)

I believe that all four actresses were driven by the Confucianist Ethic. Unconsciously. Our unconscious culture dictates how we all behave, how we are motivated and what’s more, we usually cannot explain the reason why we are not doing something even though rationally, logically and consciously we know it is something we must do or should do. I was particularly fascinated watching at rehearsal when she was confronted with the kissing scene for the first time. She shook her head, shifted from one foot to another, smiled nervously, then said: “I can’t ….” in an apologetic voice, looking helplessly at Peter, her leading man, then the director, Wolf. Her body language said it all. When asked why she would not do the kissing, shook her head and said “I can’t…” “I don’t know….I can’t….” Her Vietnamese upbringing, from a traditional Vietnamese mother (Vietnam was colonized by the Chinese for over a thousand years and Vietnamese culture has a lot of Confucianist values, conscious and unconscious), has shaped an unconscious culture steeped in Confucianism.

In this case with these four women, in spite of the fact that they are “modern” Asian women, and they know there is nothing wrong with the kissing scene, they could not and would not do it. It made me smile as I recalled how hard it was for me to do the social kiss when I first arrived in Australia (I had talked about this in one of my previous editorials). Watching these four women who were so much younger than me made me realize some things do not change.

The underlying Confucianist culture embedded in all Chopsticks or sinitic people does not change. Kissing is not in the Confucianist culture. As soon as we Chinese get out of babyhood, we are thrown onto the road of “no touch”, the strong incest taboo together with the “no touch” imperative means that Chopsticks people are conditioned not to show their emotions, in word and deed. Especially in public.

Working with the cast and crew of Our Man in Beijing during four productions in two countries over three years, had taught me much about human beings. There are universal factors that govern all our behaviour: yes, we are all affected by biological and physiological stressors such as heat and humidity in Malaysia, but in the main, it is our culture, both conscious and unconscious, that determine how we respond to situations and people. And often it is our unconscious culture that controls us, regardless of fame or fortune. So to kiss or not to kiss, that is the not the question but how we harness the power of our unconscious, that is the real question.

3 thoughts on “I Am Not Kissing Him!”